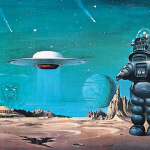 Bureaucrat Founder
782 Edits since joining this wiki
June 6, 2014
Psyfyman81 is a science fiction writer and administrator of Interstellar Wiki, he also contributes to Creative Sci-Fi Wikia and Alternate History Wikia. He is available mostly in the morning and night, PST (UTC-8).

"In the distant future of the 2060's - 70's, mankind's food supply has grown dangerously low after several immense dust storms, known as the Blight, blow across the globe, creating a second Dust Bowl and damaging world-wide crops, along with wheat, okra and potatoes dying out completely. This plunges the planet into a food crisis, starting a war over resources. Not much is left, with the world's food supply steadily running out.

Years later, Joseph Cooper, a NASA-trained pilot and engineer, crashes his prototype aerodynamic transfer vehicle, the Ranger Test Ship, in a speed test flight over the Straits. Due to an unknown gravitational anomaly, the instruments began to indicate impossible readings, causing his fly-by-wire system to fail. Incorrectly perceiving the Ranger as well outside safety parameters, the on-board computer immediately shut itself down, spinning out of control into a nose dive. Cooper managed to eject just before the crash and the memory of the accident haunted him for over a decade later, forcing him to retire from NASA for good.

Cooper, residing in Denver, Colorado, now operates a large corn farm along with his father-in-law, Donald, eldest son,Tom, and ten-year-old daughter, Murphy. The resource wars are now over and military forces are dissolved worldwide as well as NASA. The world is now mainly an agrarian society, requiring Cooper to "do his part" to grow what food is left: Corn. Tom adopts his father's farming nature, while Murphy inherits Cooper's aspiration to explore the unknown. In their farmhouse, Murphy begins to notice certain patterns in her room's bookshelf, prompting her to count spaces of toppled books to come to the conclusion that a "ghost" is trying to communicate with her through Morse code. Cooper believes these findings to be nonsensical and dismisses them. He then drives the two to their school for a parent-teacher interview, letting Murphy control the gear-stick. A fault on shifting to third causes the truck to burst a tire, forcing them to get out and repair it. While doing so, an Indian Surveillance Drone passes overhead, prompting Cooper to get back into the truck and chase after it, regardless of the flat tire. In pursuit through the cornfield, Cooper manages to lock on to the drone with a Dell Latitude laptop and gains control of it, believing it's solar cells could power an entire farm. Stopping at a nearby hill, they set the drone down and salvage it, much to the dismay of Murphy, who protests to just leave it alone. Cooper responds that the drone has got to adapt like the rest of them.

Arriving at the school with their newly acquired drone, Cooper discovers in the parent-teacher interview that Tom's test-scores make him suitable for farming, but not enough to become an engineer in college. This upsets Cooper, but the principal assures that the world needs more good farmers, and that engineers were no longer wanted. In another case, Murphy's teacher, Ms. Hanley, tells Cooper that his daughter brought in an old Federal textbook, detailing the Lunar landings. The school, however, is apparently taught that the landings were faked in order to bankrupt the Soviet Union, and that they wasted money building useless machines. Aggravated, Cooper reveals that his wife, Erin, had a malignant brain tumor, which was undetected due to MRI's no longer existing. Deeply distressed that Murphy is being educated by conspiracy theorists, he gets her suspended, and receives a radio call from a fellow farmer, explaining that their farm combines have malfunctioned and requesting him to come over and take a look.

Returning home with Murphy, they find that all the self-automated combines on their farm have driven over to the house as of an unknown anomaly interfering with the compass. Entering the house, the two hear a banging noise coming from Murphy's room, and they go up to investigate. They find several books have fallen off the shelf, and Murphy once again claims the ghost is trying to communicate through Morse. Cooper repairs the faulty combines by resetting every compass clock and GPS to offset for the anomaly, with Donald apologizing that Cooper never had a chance to do anything with his piloting skills.

Cooper later takes the family to a baseball game, where another massive dust storm arrives over the hill, forcing the spectators, and Cooper, to evacuate and drive home while they are viciously attacked with dust at high wind speed. As they return home, Murphy realizes she forgot to shut her window, and Cooper goes up with her to close it. Dust billows intro the bedroom, and as Cooper closes the window, the dust settles down into strange lines on the floor, fascinating Cooper as he begins to believe Murphy's ghost theory. Cooper discovers that the lines are, in fact, binary code, detailing coordinates to an unknown location. Murphy stows away on the trip over and they are greeted at a gate by the robot, TARS. The robot takes him into the facility and demands information on how they found this place. After threatening to turn the AI into an overqualified vacuum cleaner, Dr. Amelia Brand steps in and takes Cooper into the conference room, where he meets his old colleague, Prof. John Brand (Amelia's father), scientists Dr. Nikolai Romilly and Dr. Doyle, and Murphy. Prof. Brand reveals Cooper had stumbled across the discontinued NASA, which had resided to the remains of an abandoned NORAD HQ facility in Colorado Springs. NASA had apparently refused governmental orders to "drop bombs onto starving people" and was subsequently put out of service. After realizing the mistake, they were brought back and continued work in secret because public opinion wouldn't allow funding for space exploration, especially when struggling to put food on the table. Corn is all that is left of the world's crops, and Cooper learns that it will also die within decades. The Blight thrives on Nitrogen, which makes up 80% of the Earth's atmosphere. As it feeds, the planet's oxygen supply declines, meaning the last to starve will be the first to suffocate, and subsequently, Murphy's generation will be the last to survive on Earth. When Cooper asks Prof. Brand what his plan is to save the world, he tells him that they cannot save it, but must leave it.

Prof. Brand requests Cooper to be the pilot of their new space exploration team on the Endurance, a viable, long-range, high-efficiency, interplanetary spaceship, capable of prolonging crew life for missions on extended periods of time."

Retrieved from "https://interstellarfilm.fandom.com/wiki/User:Psyfyman81?oldid=10456"
Community content is available under CC-BY-SA unless otherwise noted.