Robots are automated machines programmed with artificial intelligence, some of which are designed to emulate humans in humor or attitude. At least some of the robots used in Interstellar are formerly used in the military, specifically the Marine Corps. When the entire United States military was disbanded, these robots were re-purposed to assist and act as companions for the humans that worked in NASA.

The robots featured in Interstellar are monolithic and have a cube like shape but can shift their form to reveal other cube-like appendages within their bodies. The geometrical proportions of the parallelepiped (depth, width and height) in "static" configuration are 1:4:8.

They are designed to serve their assigned human and even sacrifice themselves for them. Their personality traits (such as humor, honesty, and discretion) can be altered in their settings.

The robots are made of several folding components. By splitting the folding components along different axes of rotation, they are capable of four types of subdivided movements – a two legged human-like locomotion, a slow-yet-steady 'crutch walk’, a faster gallop, and a high-speed, four legged ‘wheel’ mobility. There are other subtypes of these movements that the robot can undertake with its manipulator arms extended. 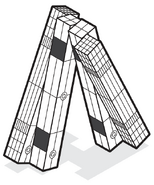 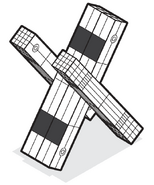 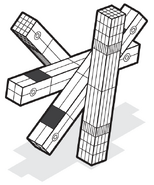 The production of Interstellar built eight such robots for the intended purpose. During the sequence of planet Miller , two robots had to be re-built as they suffered corrosion on their alum-stainless steel exoskeleton. Most of the robots’ footage was shot in-camera. CGI was set aside for more elaborate scenes like the dramatic ‘run for your life’ moment on Planet Miller involving CASE as it morphs into a ‘wheel’ and tries to rescue Amelia. The wheel/carrying Brand sequence was actually done by the body being attached to a modified atv.

Community content is available under CC-BY-SA unless otherwise noted.
Advertisement