Kip Stephen Thorne (born June 1, 1940) is an American theoretical physicist, known for his contributions in gravitational physics and astrophysics. A longtime friend and colleague of Stephen Hawking and Carl Sagan, he was the Feynman Professor of Theoretical Physics at the California Institute of Technology until 2009 and one of the world's leading experts on the astrophysical implications of Einstein's general theory of relativity.

Thorne, whose work inspired the film, acted as scientific consultant and executive producer. The premise for the film had originally been conceived by producer Lynda Obst and Thorne, who had become friends when Carl Sagan once set them up on a blind date. Thorne and Obst previously collaborated on the 1997 film Contact and conceived a scenario about "the most exotic events in the universe suddenly becoming accessible to humans." The project attracted filmmaker Steven Spielberg's interest in directing and began development in June 2006, with an 8-page treatment written by Obst and Thorne with Spielberg attached to direct. Jonathan Nolan was hired to write a screenplay for the film, which would be Interstellar. When Spielberg left the project, Jonathan Nolan recommended his brother, Christopher Nolan, as the new director. Joining the project in 2012, Christopher Nolan met with Kip Thorne, then attached as executive producer, to discuss the use of spacetime in the story.

As the scientific consultant for the film, Thorne's role was to ensure the depictions of wormholes and relativity were as accurate as possible. "For the depictions of the wormholes and the black hole," he said, "we discussed how to go about it, and then I worked out the equations that would enable tracing of light rays as they traveled through a wormhole or around a black hole—so what you see is based on Einstein's general relativity equations." The eventual depiction of the wormhole was depicted as a sphere; the accretion disk of the black hole was described by Thorne as "anemic and at low temperature—about the temperature of the sun," allowing it to emit appreciable light, but not enough gamma- and X-rays to threaten nearby astronauts and planets.

Early in the process, Thorne laid down two guidelines: "First, that nothing would violate established physical laws. Second, that all the wild speculations... would spring from science and not from the fertile mind of a screenwriter." Nolan accepted these terms as long as they did not get in the way of the making of the movie. At one point, Thorne spent two weeks trying to talk Nolan out of an idea about a character traveling faster than light before Nolan finally gave up. According to Thorne, the element which has the highest degree of artistic freedom is the clouds of ice on one of the planets they visit, which are structures that probably go beyond the material strength that ice would be able to support.

On November 7, 2014, W. W. Norton & Company released The Science of Interstellar, a book by Kip Thorne. 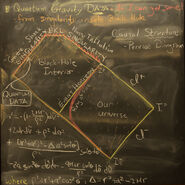 Retrieved from "https://interstellarfilm.fandom.com/wiki/Kip_Thorne?oldid=10299"
Community content is available under CC-BY-SA unless otherwise noted.